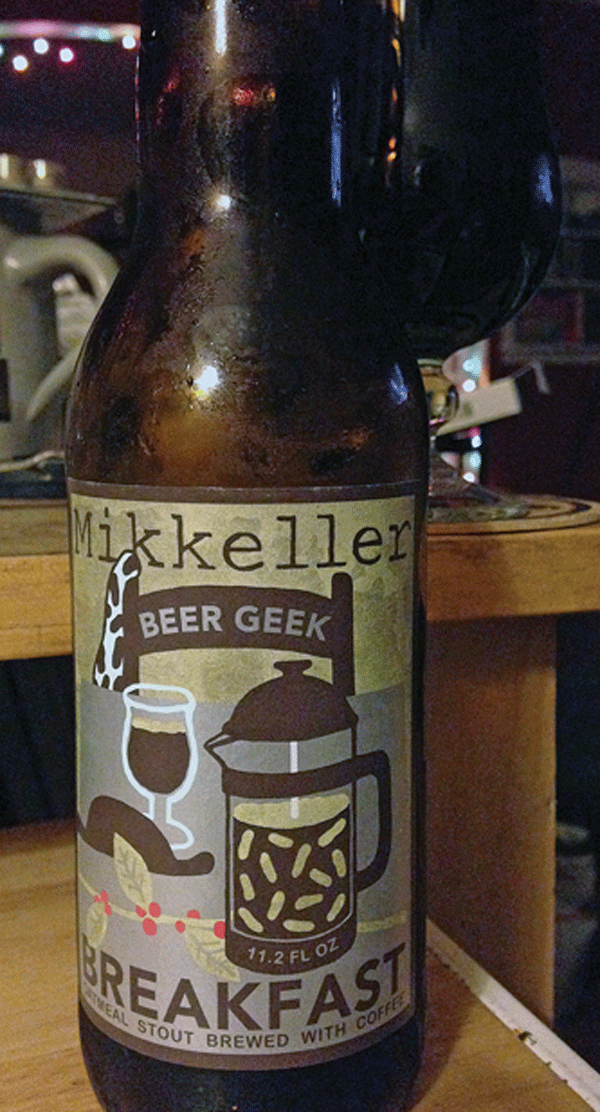 One of the many great things about bachelorhood is being able to eat and drink what I want when I want. Life – and that includes meals – becomes a series of compromises when you share space with another human being.

For example, I had a hankering for breakfast for dinner the other night. A good old English-style fry up was already on my mind before I got home from work – fried bacon, fried egg, fried tomato, fried bread and maybe some baked beans on the side.

The only question was, what to drink with my English breakfast dinner? I didn’t have to root around the magic fridge long before coming up with the solution – Beer Geek Breakfast, an oatmeal stout brewed with coffee from Danish brewer Mikkeller, via a contract brewery in Norway.

Oh, boy! That is a good cup of coffee AND a good glass of stout. Things can’t get much darker than the impenetrable blackness of this chewy breakfast beer.

Better yet, it went beautifully with my breakfast dinner sandwich. Big dark earthy flavors complemented the sarnie (that’s English for bacon sandwich) like a mug of gourmet coffee with breakfast.

Speaking of breakfast, I think I’ll have pizza and a pilsner for mine. Just because I can.

For dessert I reached deep into the magic fridge and pulled out a bottle of Bitter Neighbor Black IPA from the Third Street Brewhouse of Cold Spring, Minn.

I was not familiar with the brewery, so after cracking the bottle open, I looked up Third Street Brewhouse, which it turns out is the craft beer division of the Cold Spring Brewery, “the #1 producer of energy specialty drinks in the country and the #1 producer of exclusive beer and crqft beer brands for major retailers in the United States and other companies throhgout the world.”

I also learned the beer I am drinking was made defunct in an organizational shakeup last spring. Bitter Neighbor IPA was one of three beer styles the brewery dropped from production due to poor sales.

Hmmm, that’s too bad, because this is a very nice black India pale ale. There is something lovely about the combo of a hoppy IPA played out against the roasted malts of black beer. It’s like the classic merger of peanut butter and chocolate or sauerkraut and kielbasa.

There is not much point in writing about a beer that is no longer made, but I can say that the Third Street Brewhouse is the craft beer division of Cold Spring Brewing,