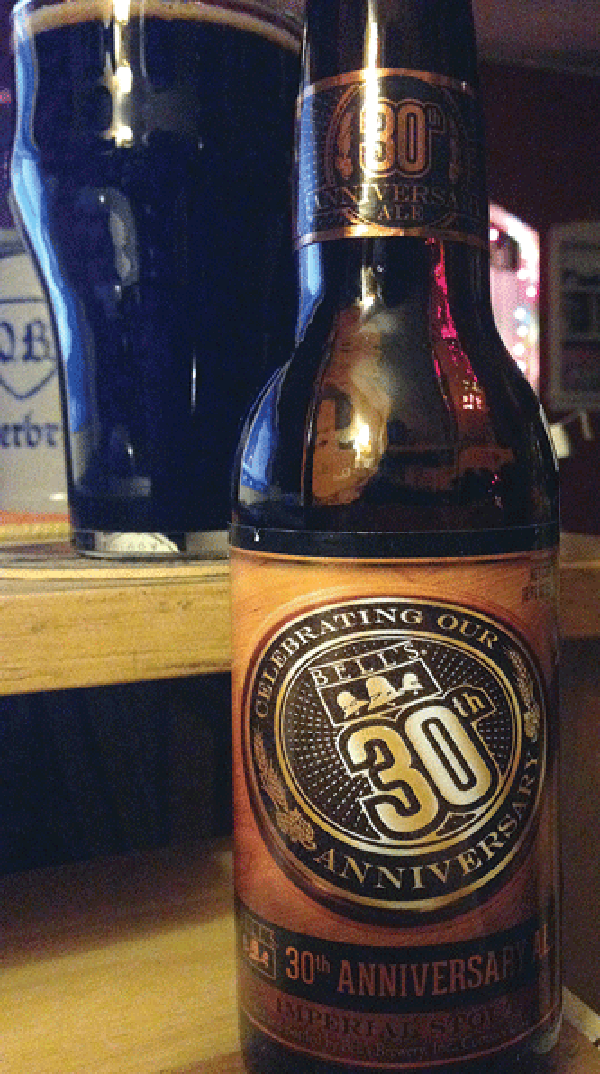 Paul & Linda McCartney’s remastered, 180-gram version of Ram arrived in my PO box today. All day I looked forward to being home and spinning my new disc.

Ram is the only recording attributed to the couple. It was released in 1971, a year after the breakup of McCartney’s former group. This Apple Studio remastered vinyl release includes a very tasty second record of outtakes from the recording session.

I needed something celebratory to enjoy with this new release of an old favorite, to be played on my new U Turn Audio turntable. I had something very specific in mind to drink while listening to Ram on a February night, but when I got to the store, another brew caught my eye.

I’m not going to mention what was on my mind – I’ll get to that another day – but I will say that, like the beer I chose, it, too, was an imperial stout.

I chose is Bell’s 30th Anniversary Imperial Stout. I have great respect for Bell’s Brewery, so an imperial stout celebrating the Michigan brewery’s 30th anniversary is a no-brainer for my own private party with the release of a new old record.

I must interject the one thing about Bell’s that has always puzzled me – why is Big Two-Hearted Ale so popular? The beer itself does nothing for me, but I cannot tell you how many people I know who love the beer.

Despite the big fish on the label, I don’t think this beer is about fishing, is it? Can Big Two-Hearted Ale’s popularity mean that Michiganers are still proud of Papa Hemingway? Certainly the name of the beer is a reference to Hemingway’s short story “The Big Two-Hearted River,” which, if my Hemingway memory is correct, is one of the Nick Adams stories taking place in Michigan’s Upper Peninsula (I must admit it’s been a long time since Ernie and I have crossed paths).

The surprise in that thought is that it was my impression Hemingway had been found wanting in these post-feminist times, and, so, not worthy of literary or beery admiration.

Well, please forgive that aside. Let’s get back to this amazing, delicious celebratory imperial stout, and not an ounce of literary baggage in sight.

It comes on like a cup of heavenly rich cream that just happens to be black as Hades. I go to exclaim “Jesus!” in soulful praise of this beer, but cannot utter a sound because my lips are stuck together with its black stickiness.

The taste is a compact power punch of flavors. I can’t pick out any one thing. All the usual suspects are there (you know them – malt, chocolate, coffee, toffee, port, raisins, bread, alcohol, etc., etc.), but compact and changed by the brewing process into an amazing collective taste that I can only describe as Earth’s blood.

Well, I wish Bell’s a very happy next 30 and beyond! I recommend you find a bottle.