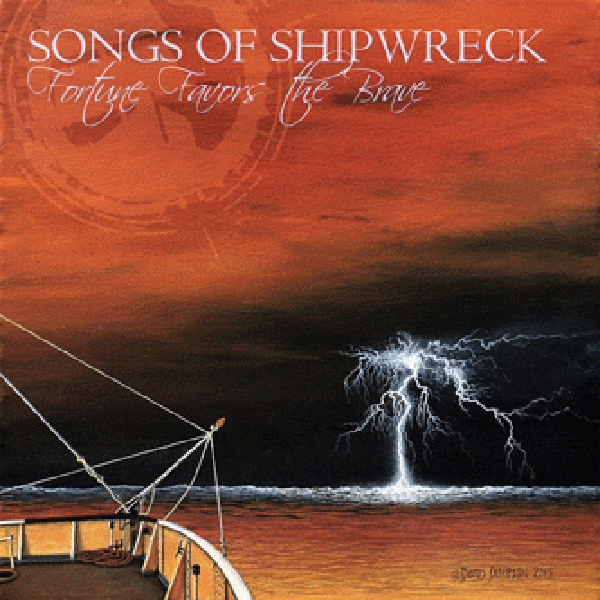 The band Songs of Shipwreck has been around for awhile and has played their fair share of songs at local venues. The line up includes: Kent Paulson (guitar/vocals), Sean Mahoney (guitar/vocals), Matt Sjelin (keys/vocals), Dave Clark (drums) and Steve Karels (on bass…of course). The group is certainly tight with this release and it passes as something worth listening to, but my only hang up is meaningful depth. This is not to say there is no depth, but you have to listen very carefully for it, because it sounds like upbeat alt-rock throughout most of the album. Upbeat alt-rock with some awesome instruments is what is really going on here, from there it starts to sink.
The album begins with the track “Small Craft Advisory,” this band kind of takes its name seriously. The album was recorded at the Weight Room in Washburn, the studio where I cut my teeth on a few albums. The album opens with an actual “small craft advisory” warning. This is the kind of opening I’d expect from an album put out of the Weight Room. The songs on this album are well done, but leave something more to be desired. Everything is sitting well, but I’m failing to be moved by the material. The album isn’t really sad or happy, there is supposed to be some sort of deeper meaning here, but it’s not leaving an impression. I can tell with lyrics like, “your face turns blue, you waste these years, never knowing what’s to lose,” that’s not light stuff, we’re dealing with, but why does it seem like it’s not driving things home? I think that as far as the instruments go, the whole thing comes together. My favorite parts are the piano and lead guitar, the band has it together, so no problems on that end. Lyrically and vocally, I’m trying to find something to grasp and it all floats by.
With the next track,”Rolling Hills,” I continued to try to pin-point something with the lyrics. “If I finally pull the trigger, wherever I may roam, it still shows me that I’ll never be alone.” Such a line should have some weight, but, the songs are so tied up in the instrument aspect that the vocals are buried. This album has plenty of punch, but lacks dynamic. Even when things seem deep or are going somewhere that strikes meaning, the music overall is just bouncy and it misses its mark.  Things just move really fast from track to track, which might make for a good live show, but the listener needs to feel something real in an album, or maybe just I do. While the instruments do often overplay the lyrics, the breakdown on “3rd Floor” is pretty awesome. Talk about tickling the keys.
This album hints towards deeper meanings, but just doesn’t make it. As far as a fun rocking album, oh yeah, it’s just that. I’m trying to find a slot to even put this album into. I’d like some quirkiness and the track “Curiosity” fulfills that with lyrics like, “Curiosity didn’t kill my cat, the Man did.” Why doesn’t this feel as fun as it should?
So, overall, well recorded and well done. I just don’t connect anyway with the material. There are sometimes deeper lyrics, but instrumentally everything has such an uppity feel, they could be singing about suicide or dismembering a body and the message would get lost. There is a message, but as I mentioned, you need to listen really close to get it. The music itself does not exactly portray what’s going on. This leaves me in a bind, because everything about this album is good, aside from the fact that it should actually go somewhere besides being a fun alt-rock album. It wanted to go somewhere beyond that, but that’s what it is.
Rocking out is fine, and that’s what these guys do, with amazing talent at times. Cutting deep? Well, there are some good lyrics here and there, but they aren’t matched up to what I think they were meant to say. Some of the songs had a deeper meaning and then it was glossed over by upbeat rock that wasn’t fitting at times. The album could have used some transitions from slow to fast and/or light to heavy. Really, anything to mix this album up would have helped it be something a little more something that the listener could start to feel. Let it be happy or sad if it should (or can) be. The album is remarkably consistent with radio appropriate and sterile tracks, I want to hear about those circumstances that ended up in a pop-punk song. Go and do some soul searching and no one has to go out and give a full on play by play, in someway, relive, recreate and transfer over those feelings in a genuine manner.
These guys play often and studio time isn’t cheap, so I guess they knocked the songs out, but there was more that could have been done with some build up, hooks and overall flow. I’d take it easier on these guys, but they’re seasoned musicians. It’s an album they can proudly put out to those who know about them. To the person who might not have heard them before, the impact will be slight. So, the album isn’t a shipwreck, it’s just bouncing on four or five foot waves on a fairly nice day. A good effort with a beautiful arrangement of guitar and keys, but it’s not going to grab you by the soul. That’s not something that happens often. Feeling a certain change of emotion is the number one indicator that an album is amazing to me and while this is worth a listen, it didn’t spark what I was hoping for.