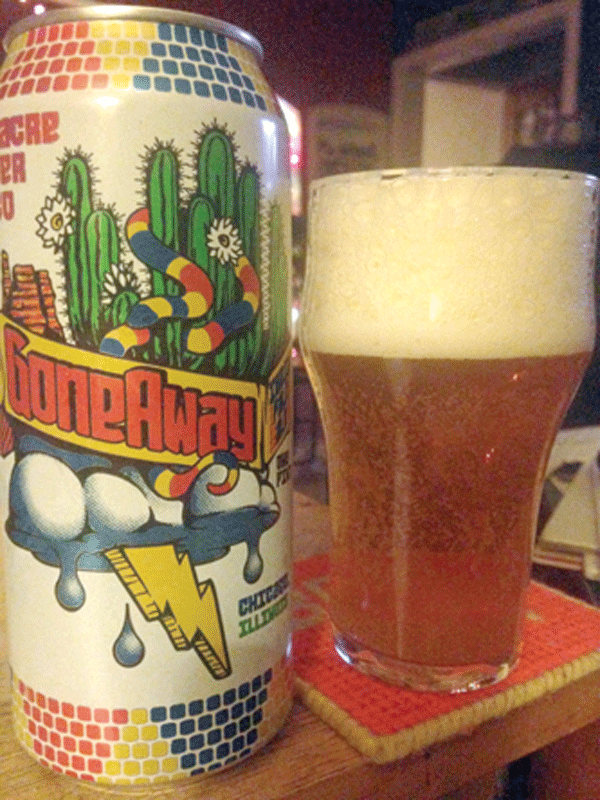 A couple of Chicagoland beers made it into the magic fridge recently, courtesy of my colleague Myles Dannhausen, who was up from his Chicago digs for the recent pond hockey tourney in Baileys Harbor. He asked if he could bring along any beers that we can’t get here. I suggested a couple of Michigan beers from a brewery in a former funeral home that are supposedly available in Chicagoland, but no luck. So he brought a couple of Chicago-style pale ales.

Attracted to the colorful cacti and coral snake on the 16-ounce can, I started out with Gone Away, an India Pale Ale from Half Acre Beer Co. The odd, pop art/comic book can is hard to ignore.

I poured some fast into an English half-pint glass and marveled at a mass of big, gassy bubbles that rose to the top, and then settled down into a thin white cap spread across the surface and clinging heavily to the sides of the glass, which is quite an attractive sight, sitting atop the very English-looking hazy golden-copper beer.

A promising grassy, skunky, citrusy aroma wafts up the snout and tells me this is no English IPA. I take the first sip, and my mouth fills with a pleasant grassy/citrus flavor. Big grapefruit finish.

The southwestern motif seems fitting for this American IPA because I can imagine it being a cheery companion to a meal made with chiles. But all I’ve got right now is a bag of hickory smoked peanuts, which go with just about anything. I’ll save the other can Myles gave me for a night of chiles.

So I move on to Free Bird, an American Pale Ale from Begyle Brewing Co. This is a beautiful-looking beer. It pours an even deeper copper-color than the previous IPA, with a much thinner head.

Hmmm. If I had this in a blind tasting, I don’t think I would ever pick it out as a pale ale. I detect a spiciness that says saison, and a tartness that suggests a Belgian ale. I might have even guessed it’s a rye beer before pale ale. So I have to assume that American pale ale – especially in the City of Big Shoulders – means anything goes.

Although the appellation puzzles me, I dig the beer. Clean, crisp and eminently drinkable, I’m sorta beguiled by Begyle’s Free Bird.