The water of Duluth 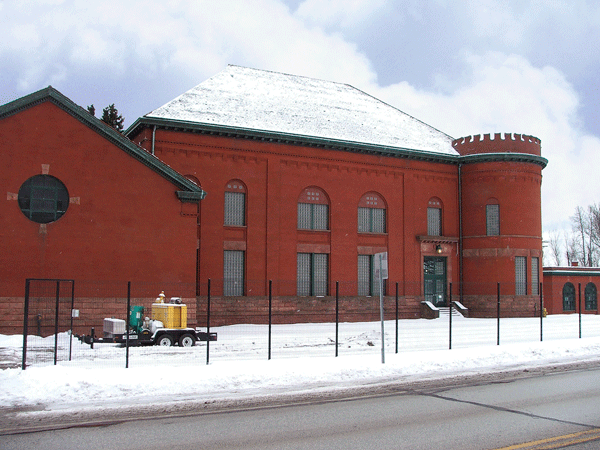 The cleanliness and safety of the water that comes out of our household taps is easy to take for granted, but it doesn’t “just happen.” As recently demonstrated by the tragic lead-poisoning cases in Flint, Michigan, clean water depends on a safe distribution system and a series of safeguards which, if overlooked or ignored, can create enormous problems for a community. To better understand Duluth’s water system, I toured the city water plant on January 26, 2016.
The water plant is located on Scenic Highway 61, about three miles north of Lester River. The most immediately recognizable building, located on the lake side of the road, is the pump house. Dedicated in 1897, when Duluth first began drawing water from Lake Superior, the imposing red-brick structure has expansive walls, tall glass-block windows, and decorative design elements such as cornices that one doesn’t see any more. A crenellated tower at one corner of the building lends it the appearance of a castle. 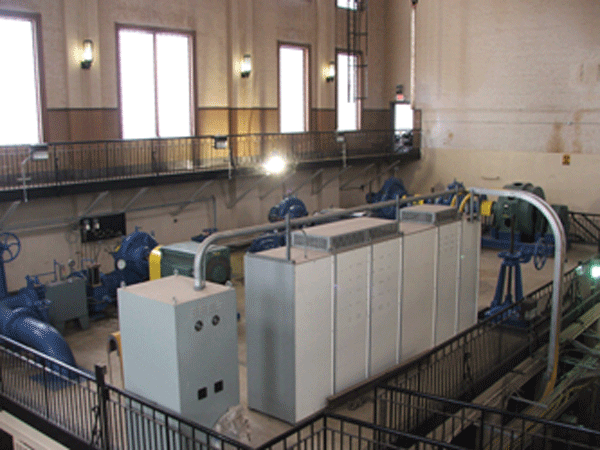 Inside the pump house

The filtration plant, on the landward side of the road, was built in 1975. Although quite large, it probably goes unnoticed by the many passing motorists who are checking out the pump house. All of the water that is used in Duluth passes through the pump house and filtration plant. The intake pipe, which draws water from 72 feet below the surface of Lake Superior, is five feet in diameter and extends a quarter-mile into the lake. As the raw water enters the pump house, it first passes through a screen to rid it of debris. Although one might think that water from 72 feet below the surface would be fairly clean, this is not always the case. In the spring and fall, Lake Superior water “turns over”—that is, it freely circulates from top to bottom, especially during storms, which greatly stirs things up.
“You’d be amazed how many twigs and leaves you get riled up in there,” Mark Proulx, the city’s public works and utilities supervisor, told me. “One year, I even caught a sunfish.”
“From 72 feet underwater?” I asked.
He laughed. “I know. I couldn’t believe it. I kept shaking my head. But they confirmed it.”
When I entered the pump house with Proulx and utility operations manager Howard Jacobson, the thing that struck me most (other than the deafening noise of the pumps, which I had expected) was how open and spacious the building was. As we circled the airy, high-ceilinged pump room on a catwalk, the pumps below, which were about the height of a person, looked almost small. All of the open space is due to modern technology. When the pump house was built, in the 19th century, the pumps were steam-driven. In an old photo that Proulx showed me from that era, the massive steam-driven pumps reached almost to the ceiling. An observer of old, instead of looking down on the pumps from the catwalk, would have had to look up. 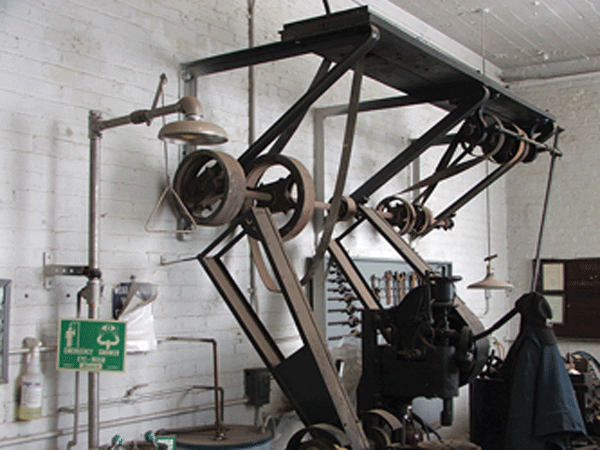 Until 1912, city water received no additional treatment after being pumped from the lake. “It was just point source,” Jill Oswald, a lab technician at the filtration plant, told me. “They pumped the water out and into your house. 1912 is when they had enough cholera and typhus outbreaks and deaths that they decided perhaps chlorination would be a good thing.”
Today, filtration and purification of the water is taken seriously. “Every day, twice a day, we run labs on both our raw and what we call our high-lift distribution water, which is the water that we pump out to the system,” Oswald said. “We check pH, chlorine, sulfates, alkalinity, turbidity, basic water chemistry panels, to make sure that everything is flowing exactly where we want it. It also gives us a secondary way of checking pH against our meters, against what the operators’ meters are reading, so that we know everything is right on target and everything is where it should be.” 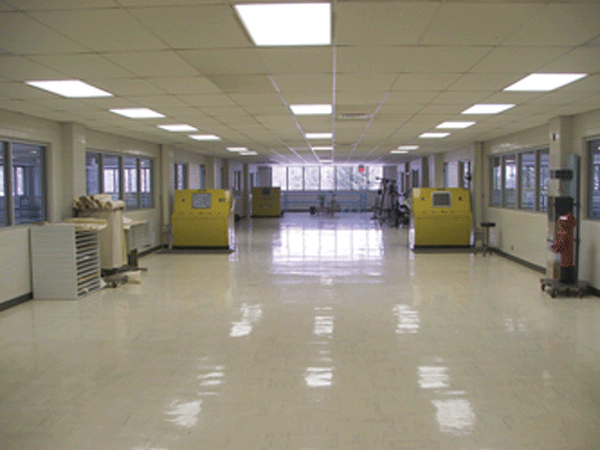 Each month, Oswald visits 90 sampling sites throughout the city and tests the water for chlorine and bacteria levels. (Chlorine quickly evaporates out of water exposed to air, so field tests are important for accurate readings.) The state health department visits the water plant quarterly to test the water, and the lab technicians send samples to the state regularly for further tests—“things like haloacetic acid, methanes, fluoride, all of those type of things,” said Oswald. Every three years since 1992, when it was mandated by the Environmental Protection Agency, the city’s water has been tested for lead and copper contamination. It has always passed the tests.
“We are very structured in what tests we run all the time, and we have to do that to stay [compliant with health regulations],” Oswald said. She said that she had never detected a serious problem with Duluth’s water, and certainly never a systemic problem. “I can’t tell you what happened to Flint, but it’s not happening here.”
The filtering room, in contrast to the pump house, is serenely quiet (“You should be here at midnight,” said Proulx). Broad viewing windows overlook five large pools of water (a sixth, unused, sits empty). Each pool has a computer station associated with it, and these stations are about the only fixtures in the whole expansive room. The water in the pools filters down through layers of sand, gravel and rock that “mimic what the earth is like,” according to Jacobson.
These particular filters were built in the 1970s, when pollution from mining operations on the North Shore had become a big health concern for Lake Superior communities. Proulx said that the federal government and university researchers had used the Duluth filtration plant as a pilot plant before expanding the techniques they learned there to other communities. As such, the filters are “ultra-filters,” capable of ridding the water of the tiniest asbestos fibers. 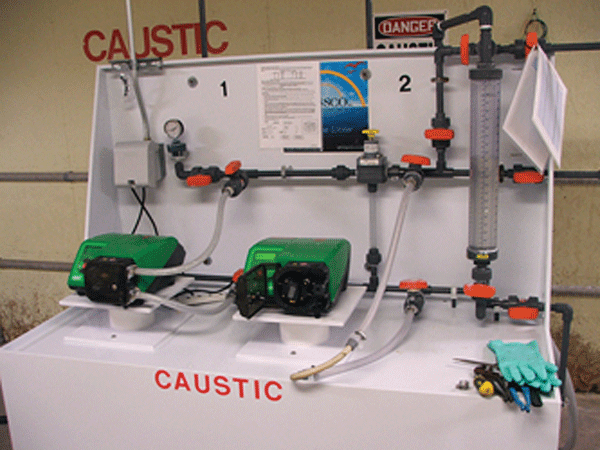 After filtration, various chemicals are added the water. Raw water, even pure Lake Superior water, is “aggressive” on pipes—that is, it corrodes them. To counteract the aggressiveness, small amounts of caustic soda are added to the water to raise its pH level to 9.1 or 9.2. Although caustic soda may not sound like the most comforting of additives, its effect is such that the water, rather than eating away the pipes, actually deposits a thin protective layer of calcium carbonate on them, greatly extending their life. It also decreases the solubility of any lead and copper that may be present, reducing the likelihood of such elements entering the water. 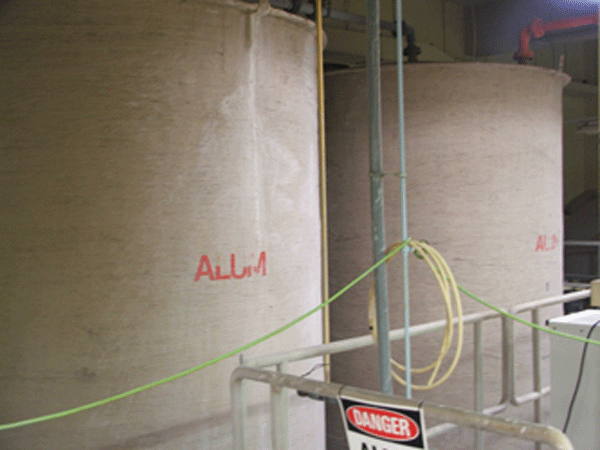 Proulx said that Flint’s aging lead pipes had been eaten away by aggressive water from the Flint River, which released lead into the system. “Once it’s chewed away, there’s not much you can do about it,” he said. Apparently nothing was added to Flint’s water to raise its pH, and there seems not to have been a regular regime of testing. How Flint’s problems escaped detection for as long as they did is an ugly story of malfeasance and irresponsibility that Duluth’s rigorous testing regime seems designed to avoid.
Before water leaves the plant, other chemicals are added: Aluminum sulfate binds with silts and settles them out of the water; polymer is added to coat filters and help them screen out microscopic particles; chlorine gas disinfects the water; fluoride helps prevent tooth decay. 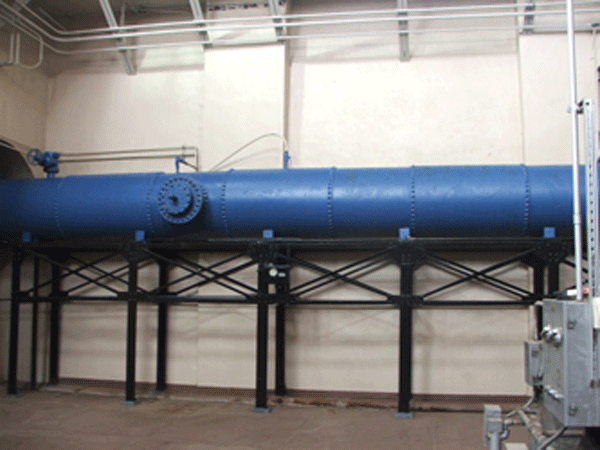 Water is transported into the city via two large trunk mains, a 42-inch steel pipe and a 36-inch cast iron pipe. The 42-inch main, in particular, may soon be the focus of more public attention. As the original pipe that was laid when the water plant was built, it has been in use for more than 120 years. Although it has performed well, according to chief engineer of utilities Eric Shaffer, “It can’t last forever.…We had a leak on it this past year which brought it back to the forefront that sooner or later we need to replace [it].”
Obviously, such a project would not be cheap. Before the water department undertakes it, they would like to ascertain just how serious the problem is. To measure the wear and tear on the pipe, the thickness of the pipe’s wall needs to be measured; very thin spots would indicate a danger of future leaks. According to Shaffer, there are two ways these measurements can be made. The first involves hiring a company to float a device through the pipe that sends out electromagnetic pulses to measure the pipe’s thickness. The cost of this service would be $500,000. The second, much cheaper, way involves draining the pipe and having a city employee crawl through it, pushing the testing device ahead of them.
When I asked Shaffer if this meant the person would have to crawl six miles, he assured me that, “If we sent a person into the pipe, we would make access holes every few thousand feet” for safety.
Water is stored in reservoirs around the city until needed. There are eleven reservoirs in the city. The largest are near the bottom of the hill and smaller ones are near the top. (One reservoir, located next to Chester Park at 15th Avenue East and Fifth Street, has a broad, mowed lawn atop it that is ideal for playing Frisbee.) Each reservoir has a pump house associated with it, which pumps water higher up the hill as demand dictates. In a city as steep as Duluth, the energy cost associated with pumping water is considerable. “It would have been great if the lake was over the hill,” Proulx quipped.
Jacobson told me that the city is divided into “pressure zones” based on elevation, within which the city strives to maintain water pressures of 50 to 100 pounds per square inch. “If your pressure’s lower than about 30 psi, then you have an issue with delivering enough water to fight fires,” he said. “If you didn’t have pressure zones, down [at the bottom of the hill] you’d have pressures of almost 200 psi, where you’d have pressures [at the top] of 20 psi, just because of the elevation. So you [try to] keep an operating pressure [necessary] to maintain fire suppression throughout the city.”
The city’s water utility serves more than 28,000 residential and commercial customers. The city also sells water wholesale to Hermantown, Rice Lake and Proctor, which maintain their own distribution infrastructure. In all, more than 100,000 people depend, directly or indirectly, on Duluth’s water plant.
A control room in the water plant is staffed 24 hours a day by operators who monitor water pressures, turbidities, chemical levels, filters and basically, according to Proulx, “anything that is important” in the city’s water system. The water plant’s computer server also provides backup for the city’s gas and wastewater utilities; if their computers go down, they can contact the water plant and the operator can access all of the information and readings for the other utilities.
“We like redundancy,” said Proulx.