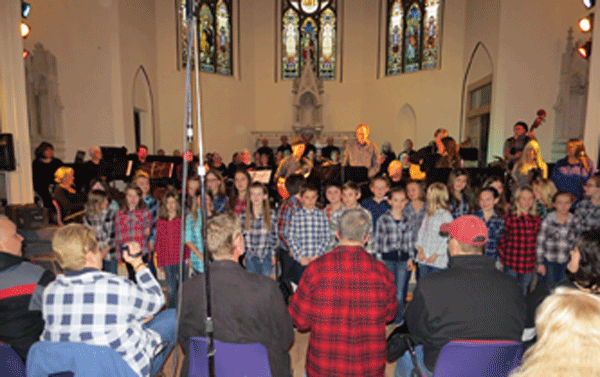 I have to start with Osmo Vanska and the Minnesota Orchestra, only because their concerts are broadcast live on MPR (in Duluth WSCD, 92.9 FM) on regularly announced Friday nights. This past Friday featured the dark (and amazing) Kullervo Symphony (1892) by Jean Sibelius, along with a Finlandia finale. A new composition, Migrations, by current composer Olli Kortekangas, was also premiered. This featured the texts of four poems by Duluthian Sheila Packa, who has strong Finnish roots.
This turned out to be two and a half riveting hours of music in Finnish and English, sung by the 58-member YL male chorus from Finland, as well as soprano Lilli Paasikivi and baritone Tommi Hakala. Maestro Vanska has performed this piece for probably twenty years, and his interpretation of this dark and violent excerpt from The Kalevala is authoritative. I was not in Minneapolis, but I sat glued to my radio performance from 8:00 - 10:30 pm for this glorious music from one of the world’s truly great orchestras. It looks like Friday, February 19 will be next, with two of Sibelius’ Symphonies along with the Violin Concerto. I invite you to tune in.

Meanwhile, closer to home, at the UWS Webb Recital Hall last Tuesday, resident composer Lois Veenhoven Guderian presented eleven of her many compositions, performed by other UWS faculty members. Her style is rich, and very intriguing to listen to, and her setting of songs seems to be very natural to her. All the singers were clearly loving the melodies, and her choice of poetry was exquisite. A wonderful duet, When Did My Feelings Change?, was emotionally sung by Vicki Fingalson and Jeffrey Madison. Ms. Guderian wrote both the poignant text as well as the music.
The Zenith Winds (quintet) also shared two pieces, one German, one British during this lovely chamber evening in Superior. As I’ve mentioned, the next several weeks features many powerful chamber performances at each of the local colleges. If you have a craving for live, professional, music, check online for dates and opportunities.

The Duluth Superior Symphony Orchestra offered a POPS! program this past Saturday, featuring the Twin Ports Tenors - W. Bastian, C. Metts, M. McConico, and J. Pierce - along with a local night club band known as Space Carpet. The tenors each sang an individual aria from the operatic world, and they sang several arias together. I was greatly amused by the creative arrangements, repetitions, and delightful footwork created for these four powerful tenors, who obviously love singing together. As encore treats, Maestro Dirk Meyer donned a conductor’s cap and joined in a quintet version of the traditional Irish Blessing, before all four tenors received a glass of white vino and toasted each other “Libiamo - let’s drink,” all in the name of Amore, of course.
Just before intermission, Space Carpet performed the piece they had composed, with the assistance of Bassist Vincent Osborn, and the orchestral arranging of Greg Kiehl Moore. These winners of the first DSSO Bridge Sessions competition were up to the task. The orchestral strings imitated electric guitar slides, and the band shared their pessimistic approach to Valentine’s Day, according to ukulele player Jen West. I couldn’t understand any of the words, so I look forward to hearing this again, but for a first collaboration, I thought this was a tremendous success. So did the audience.

Crazy Cold Beautiful belongs to John Beargrease and his Legacy

Another new creation was performed at Sacred Heart Music Center earlier on Saturday afternoon.  Crazy Cold Beautiful, a song cycle for soloists, adult choir, children’s choir, and chamber orchestra was written by Californian Robin Eschner, 2014 McKnight Foundation Visiting Composer through the American Composers Forum. These seventeen songs came from memoirs and original texts celebrating John Beargrease, the challenge of serious partnership with teams of sled dogs, and the modern race that features the Beargrease name.
William Beckstrand conducted the full ensemble, Jerry Kaldor led the children’s choir, and Take Jack - a music group from Sonoma County, CA - offered the more intimate pieces. This was heart-felt music, with texts of longing and anticipation from the late 1800s. With all the anxiety involved in delivering the mail and sledding with dogs, the final song, Snowfall, made it clear that in the end, all is at peace. What a rich and touching premier of music that will be heard again, quite likely here in our Beargrease region.
This was a great musical week all over Minnesota, so I hope you found some time to share in the many performances.