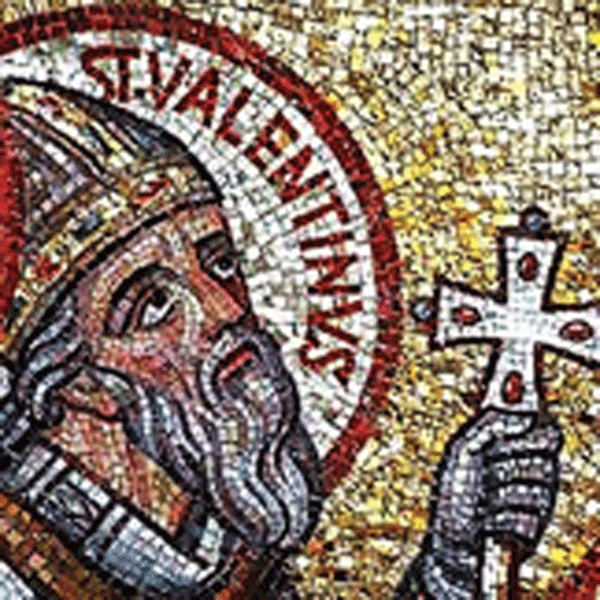 It’s the season (a climate change that seems to get a little wider with each annum) to hear of institutions and businesses struggling with issues of cultural insensitivity over Valentine’s Day, a particular target of discontent for some. Before going on to deal with implications of Valentine’s Day, I offer this as general review. As observed in any public or work setting I’ve ever seen of been part of Valentine’s Day is not a religious celebration. Neither is Saint Patrick’s Day, Saint Urho, the New Year or even Christmas. In their public forms those events are highly secularized. Regardless of whether you approve of it and participate or not; American commercial culture has turned Christmas into a time about as sanctified as Super Bowl Sunday. The most religious thing I can see about the Super Bowl is its performance on a Sunday, and that’s it. Beyond that it needs super-bounding leaps of faith to hold beer and chips as wine and bread stand-ins for communion. Regardless of what is sometimes contended, these things are not religious observances.

I have trouble deciding whether people who worry over what they present as cultural sensitivity issues have truly thought the matter through or are simply in happy pursuit of a topic they can yammer about in seeming authority and public spiritedness. I say the unkind thing (which I feel is actually on the mark) because those who seek to improve our cultural sensitivity are both suspiciously selective and awfully ignorant about it. If they really wanted to put us onto a true path of cultural awareness why not start with the calendar, a device we and all other cultures are forced to accept? Shouldn’t those who want to fix our cultural insensitivity focus on ground zero of our count starting from the birth of Christ? (Actually, a “fix” has been applied 2016 AD for Anno Domini of birth of Christ would today be 2016 BCE for Before the Common Era, but that does not change the starting place or the number, does it?) There are a couple of dozen calendars out there for use. Many, like the Gregorian, are solar. On the Assyrian calendar we’re in cycle 6700, Hebrew 5700th era, Chinese 4,000, and Armenian 1,400th.

Do any of those numbers sound better to you? Would we find any less bias with a different event form a starting point? Do you think there are not vestiges of conventions and of things long past in all of them? If we stop fussing over irrelevant issues and see the historical trail we’d find more of worth and of interest than supposed horrors of cultural insensitivity. The Gregorian calendar is so called because it was reformed in 1582 by Pope Gregory 13 as an improvement of the Julian calendar that had a rough time of things over what we call Leap Year that shows up in good old February. The Julian calendar came from the Roman calendar that divided the months starting with January for the god Janus who looked both forward and back. It was Octavian Caesar (the one who finished Anthony and Cleopatra) who modified and improved the Roman calendar by adding the month of July for his Julian family (and for his uncle Julius Caesar) plus left his own stamp with August for Caesar Augustus, namely himself.

There’s story and information in that because, you see, the man who became Caesar Augustus was a boy/youth named Octavian (Octavius) of the Julia when Julius Caesar was killed and left him as heir. Octavian was initially bowled over by Marc Anthony and fled to the provinces where he had the good sense and fortune to form a capable team that included the extraordinarily capable Agrippa who was of common birth buy uncommon quality. Eventually Octavian beat his rival and showed savvy by then forming an alliance with him that carved the Roman Empire into their respective zones. Anthony got Egypt. Egypt held not only Cleopatra, but Caesarian her son by Julius Caesar.  See the story now? All the elements needed for imperial and dynastic struggles were in place. It took a while for the situation to boil, but Octavian eventually challenged Marc Anthony with the result you know. What is often forgotten is that Octavian governed so well and powerfully he became Caesar Augustus. Julius chose well, didn’t he?

If people see the horrors of cultural bias in the above, I have pity for them for not seeing the history and stories submerged in the details of names and times. As inheritors of the Gregorian calendar we are beneficiaries and custodians of historical events and movements that take us to this place in time where some have nothing better to do than enjoy the laziness of whining over inflated issues of cultural sensitivity. History is a matter of facts and events oftentimes violent and disturbing to those who think to tame and fix this with sensitivity training. If that is all they bring away from history I say poor them for missing so much.

But returning to Valentine’s, I think it unwise to make too much of sensitivity complaints because bowing to them is a greater ill than the supposed insensitivity. I say greater ill because it has taken a long time (and is still imperfect in many applications) for gender equality to get a start. Objections to Valentine’s Day (especially in public schools) literally ask for the old standard of gender bias and segregation to be honored under the baloney of sensitivity. It is definitely not sensitive on the part of cultures that dislike what happens in a co-ed situation. It took too long for girls to get anything approaching fair play in education to see that at risk in the guise of sensitivity. To me the basis of such sensitivity complaint is no way acceptable because it is based on a belief in female inferiority to males and typically carries the odious rubbish that females are unclean on a monthly basis. Valentine’s Day may be shallow and trivial, but the bias against it is not. It is a dangerous reversion seeking a return to past gender assignments.