Standing Up By Sitting Down: The Duluth 7 Protesting in Self Defense 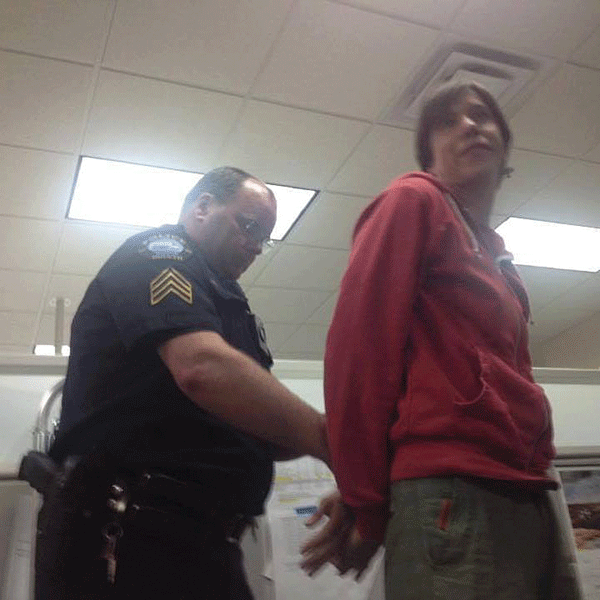 On November 2, 2015, a group of several hundred protesters made their way down Lake Avenue in Duluth and headed into the Tech Village and arrived at the Enbridge Energy office within. The group was made up of Native Americans, members of environmental interest organizations and concerned citizens who felt that proposed and existing Enbridge pipelines are a danger to the lands that they cross. The group wished to give a letter of demands to Enbridge which ultimately was rejected but slipped under a door. If it was read, it is doubtful it received much consideration.
Approximately 70 to 100 protesters entered the Enbridge office with the rest filling the hallway right outside. Eventually the Duluth Police Department arrived at the scene and made an ultimatum. Anyone in the office could leave in a timely manner or face arrest. Most left, but seven protesters remained and are now referred to as the “Duluth 7.” The seven peacefully took a seat on the floor and were arrested and charged with trespassing.
On Thursday, January 28, four of the seven appeared at the St. Louis Country courthouse to attend a pre-trial hearing. Scott Bol, Thane Maxwell and Jesse Peterson all pleaded not guilty to the trespassing charge while Patty O’Keefe pleaded guilty and had her charge dismissed on the conditions that she not commit the same or similar offense. The other three of the Duluth 7 have likewise dealt with their charges according to Peterson. Bol, Maxwell and Peterson will have to attend court again on Friday, April 1.
We had a chance to speak with Peterson about his actions and why he let himself be arrested, plead not guilty and face possible fines.

Reader: Overall, what made you come to the decision to plead non-guilty?

JP: I mean I don’t think I committed a crime nor do a lot of other people. The thing is I was defending myself and others. It seems there is a thing where sometimes in this legal system we look at what the consequences of not committing a crime are right?  We are encouraged to to be good Samaritans, sometime even legally required to do something like trespassing or breaking a law in order to follow a more important law, which includes saving self and fellow human beings.  In that way it’s self defense.

Reader: What makes you believe that it’s so important to do that?

JP: Fossil fuel industries, of which Enbridge is one of, work together to do things that are hurting people, by building more pipelines Enbridge forces more of these hurts on us.  The thing that Enbridge brings to market, well at its extraction point it used high amounts of water and poisons it, it involves deforestation and the poisonous forms of extraction are making a people that are already hurt by violent colonization even more hurt. This includes Native people who  are hunting and fishing near the Alberta Tar Sands project that Enbridge pipelines are part of. This project poisons people and the land they live on.
On the other end of things once the oil goes to market and becomes fuels, well it fuels more then cars, it fuels global warming, which is you know climate change. Climate change caused by humans is considered by scientific communities to have worsened things like the Syrian refugee crisis, while the conflict isn’t said to have been caused by exclusively climate change, it is said to be much much worse as a result of it, so you know when you see those kids on beaches dead after washing up after having fallen from boats attempting to escape Syria you are seeing a result of Enbridge’s work.
So many people have seen the picture of a three year-old Aylan Kurdi, a Syrian refugee that washed up on a beach dead, well I see climate change, I see Enbridge and Enbridge knows they are causing climate change.
I take care of a young child who when he sleeps face down in his crib, well, he doesn’t look all that different from the picture of dead face down three year-old Aylan Kurdi, this troubles me. I have to do something so more kids don’t suffer that fate.
In the Southwest, California in particular, constantly people are living under the threat of having water shut off to them, something like 25 million people. These people if there water runs out where are they going to go?  Look at a map, the water is where we are.   Global warming is proven to cause the water shortages down there, it is a thing.  The refugee crisis can happen here and they would imperil my family, I know it.

Reader: Can you give other examples of where people have done similar acts?

JP: Well there is a case in another country, Britain, I think where some protesters were let off because they presented a good argument as to how they were defending themselves by causing a disruption intended to end the fossil fuel industry to end climate change.
In the United States, a group of five people that worked with the group Rising Tide, had blocked a coal train up in the pacific northwest. These folks went to trial and several charges were brought against them, including a charge that they should be considered liable for monies lost by the trains slowed. The judge ruled that they could use the climate necessity defense; a sort of self defense notion and the people made their argument and got off of a few charges only being charged with trespassing. It was a success, all things considered.

Reader: What do you think of Enbridge laying down pipes without an Environmental Impact Statement?

JP: Well you know there have been people that “laid the pipe” without honestly disclosing all the problems they would be causing people before they got consent, you know I have heard of someone with AIDS getting in trouble for having unprotected sex with a consenting person for not having told the person the near certain likelihood of getting a serious life threatening illness, what becomes different when a giant corporation does the same thing?  I feel like Enbridge is seducing my community while knowingly giving it an illness that it wouldn’t willingly accept.
With tobacco you saw some people get in trouble for having continued to push their product while knowing it was making people sick and hiding the fact they knew, even encouraging people to continue using it. Enbridge is like that, in fact the whole of the fossil fuel industry is. You know Exxon Mobile knew their product was causing climate change and global warming and they knew what it would do. They knew 40 years ago and they decided to cover it up and move as much oil as possible for profit for as long as they could and here we are.
Enbridge, like Exxon, knows we and others have told them. You see us in the news again and again talking about it and the only way we get in the news is with protest. We have made sure people and the industries like Enbridge know and they continue. That’s criminal and we were stuck with the only thing to do, getting up in their face and making it impossible for some of their people to work in order to slow down the building of more pipelines and to show others what’s up by getting on the news. It was Self Defense for sure.

Peterson and the other two of the Duluth 7 face a fine of up to $1000 for trespassing in the Enbridge office during the November 2 protest.