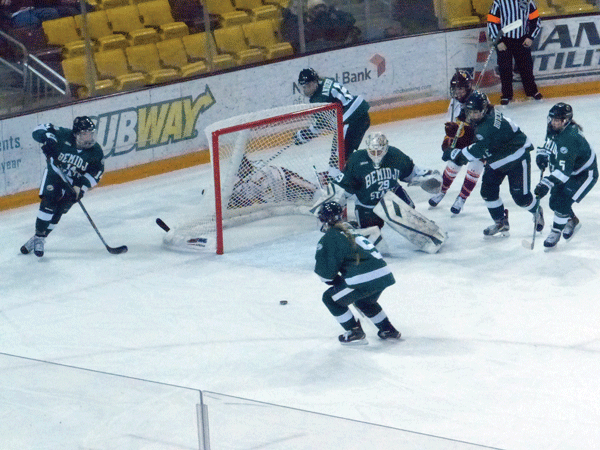 All five Bemidji State skaters defended goaltender Brittni Mowat as she beat UMD 3-2 in the first game of their series. Mowat has yielded just three goals on 118 shots in sweeping all four games against UMD. Photo Credit: John Gilbert

The year was 1999, and UMD had just started a women’s hockey program. Athletic director Bob Corran had brought in a coach named Shannon Miller to build a Division I hockey program, and even though he knew Miller from her job coaching Canada’s Olympic team – which was stunned by an upstart Team USA for the 1998 Gold Medal at Nagano, Japan – her success couldn’t have been predicted.

That USA team had a fiery center named Jenny Potter, who would go on to play so well and so successfully that she should be the first player off that Team USA to be elected to the U.S. Hockey Hall of Fame. She wasn’t. She drew the wrath of USA Hockey for her resolute attitude to do things her way, and succeed at it. That next year, women’s hockey burst onto the scene, expanding on the University of Minnesota’s lone position against the traditional Eastern powers to start up a WCHA women’s league.

UMD was included in that outburst, and Jenny Potter, dissatisfied with how things were being run at Minnesota, shocked everyone in hockey by transferring to UMD. That didn’t sit well with USA Hockey, either.

At the start of the 1999-2000 season, after a couple of exhibition games, UMD went to Wisconsin for the first WCHA series. Writing for the Up North Newspaper Network, I happened to be returning from an auto-introduction trip, and I stopped off in Madison to catch that series.

UMD had far more than just Potter. The Bulldogs also had some players named Maria Rooth, Hanne Sikio, Erika Holst, defensemen Brittny Ralph and Navada Russell, and a colorful goaltender from Finland named Tuula Puputti. Miller had recruited them from the U.S., Canada, Sweden, Finland – all over, when the new high schoolers in Minnesota balked at giving UMD a try.

In the opening game, UMD whipped Wisconsin 8-1. In the rematch, the Badgers made a determined bid to knock the stylish and swift Bulldogs around, and they made a game of it. There also were a couple of outright brawls in the game and after it was over, and UMD had won 4-2. The physical play convinced me that Duluth hockey fans were going to love this team.

But the most amazing element of that weekend came before the second game. I was staying at the same hotel as the UMD team, and Wisconsin men’s coach Jeff Sauer stopped by. We were sitting in a booth in the restaurant when Shannon Miller approached and asked Jeff if she could get a small bit of ice time for a Saturday morning skate. Sauer said his team, which had not begun play, had a training camp workout scheduled, but they would be done so UMD’s women could have the ice at 11:30.

I wandered over to watch the Badgers training camp, and sat with Sauer and then-assistant Mark Johnson in the stands. He was annoyed that his team wasn’t executing the power play well enough, and he yelled down to work it again. Meanwhile, at the far corner of the rink, the UMD women had gathered, waiting for their ice time. Rush after rush by the Badgers men ran several minutes past 11:30. Suddenly, right in mid-rush, the end door opened and the UMD women’s team trooped out onto the ice, at Miller’s urging.

Sauer said his players needed only a few more minutes, and dispatched Johnson to go down and ask Miller to call her players off for just a few more minutes. But she needed to get her players on for a quick skate and back off and to the hotel to rest and have their pregame meal. The players weren’t thrilled being caught in the middle. They gathered out between the blue lines, up against the boards, as the Wisconsin men sped past. At one point, Jenny Potter gathered up a loose puck and started stickhandling in little figure-8s near the boards. The Badgers came by and playfully tried to swipe the puck from her, but each time, Potter would pull it back and elude them as they went back to their rushes.

Finally, one Badger player tried and failed, and then made a determined effort to steal Potter’s puck. Most of the other Badgers were at the end boards, watching, while the goaltender waited at the far end for the next rush. Potter started skating in larger circles, escaping and eluding the now-embarrassed Badger. Finally she swung out farther from the boards, in the neutral zone, and he kept chasing.

Everyone was focused on it, to see what might possibly be the ending. Jenny Potter eluded the Badger one last time, and as he chased her, she took off for the far end of the rink. The Badger skater was in hot pursuit, and Jenny was at full speed, too. The goaltender braced, and Jenny came at him full speed, gave him a deke, and scored!

Immediately, the goaltender, and all the Badgers, immediately trooped off the ice, their practice ended unceremoniously. It was one of the more amazing things I’ve ever watched on a hockey rink. 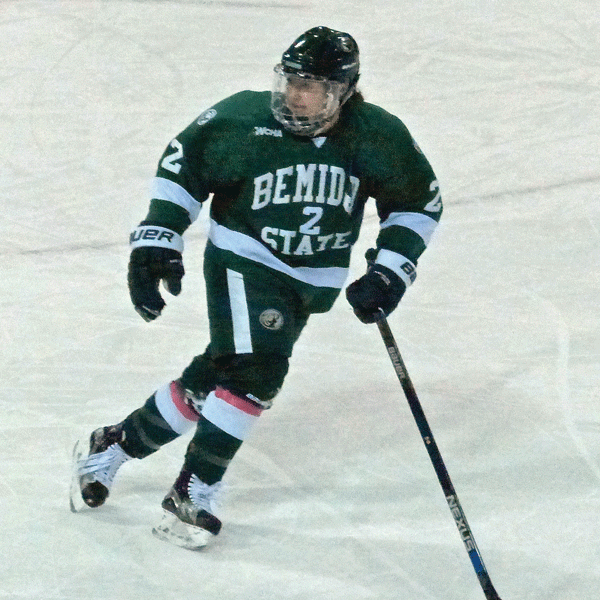 In 2000-01, UMD won the first-ever NCAA hockey tournament conducted for women. Then they won it again, and again– the first three, with banners celebrating them all hanging from the AMSOIL Arena rafters. Jenny Potter was player of the year in that first WCHA Women’s season, and she won it again in 2002-03. Not by coincidence, Shannon Miller won WCHA coach of the year in those two years, also.

Times change. Shannon Miller was rudely informed by athletic director Josh Berlo that her contract wouldn’t be renewed after last season – five NCAA championships notwithstanding. After first insisting it was only financial, later UMD said that the team hadn’t been as successful in recent years, and that her last four seasons were her worst.

Of course, she was fired at Christmas break, when UMD had won 12 of 13 games and climbed into the top 10 ratings, so it was quite omniscient of the UMD officials to assume that team might falter in the second half of lat season. To be accurate, under Miller, UMD never finished below .500 in WCHA play, with her worst season the 13-13-2 mark in 2012-13. That rebuilding season was also the only one when Miller’s Bulldogs finished below .500 overall, at 14-16-4.

Berlo hired Maura Crowell from Harvard’s staff, and UMD is struggling to try to reach .500 this season. Ohio State isn’t as good as UMD this season; the Bulldogs swept the series at Columbus 4-2 and 5-2. But since that sweep, UMD has not won. The Bulldogs have fallen into a pattern of playing pretty well, then playing with twice the intensity in the last couple of minutes, which turns out to be just enough to lose. They were swept at Wisconsin, then came home and were swept by North Dakota, and last weekend Bemidji State swept UMD at AMSOIL 2-0 and 3-2.

Losing six straight is not the formula for moving up to challenge for home ice in the playoffs.

Bemidji State has won all four games from UMD this season, as Mowat has given up only three goals on 118 shots. Make no mistake, UMD still holds 62-12-2 domination over Bemidji State through the years. At one point, UMD had a 47-0-2 stranglehold on the rivalry, but the Beavers are a respectable 12-15 against UMD since then.

Currently, the Beavers are 12-7-1 and in third place in the WCHA, while UMD is 6-13-1. The Bulldogs are heavy favorites this weekend and next, when they face Ohio State at AMSOIL Arena and then at MSU-Mankato. Then they finish with Minnesota at home, and at St. Cloud State. There is a real chance that UMD might finish with its worst record ever in women’s hockey.

This weekend, Ohio State comes to AMSOIL Arena, and it’s homecoming for UMD Jenny Potter, Ohio State’s new coach. I’m sure Jenny would never show her players any videos of herself as a player, but maybe she should find some video highlights of when she was starring for UMD and for Team USA.

There’s no chance that any record exists of that Wisconsin men’s practice 16 years ago on a Saturday morning in Madison, but if Jenny could find video of herself stickhandling and speeding in for a goal against the Badgers men, it might put the Buckeyes over the top.